Add this page to your book
Book Creator

Remove this page from your book

Help
The calculator lets you choose the energy efficiency of lighting in Switzerland in the selected year (2035 or 2050). 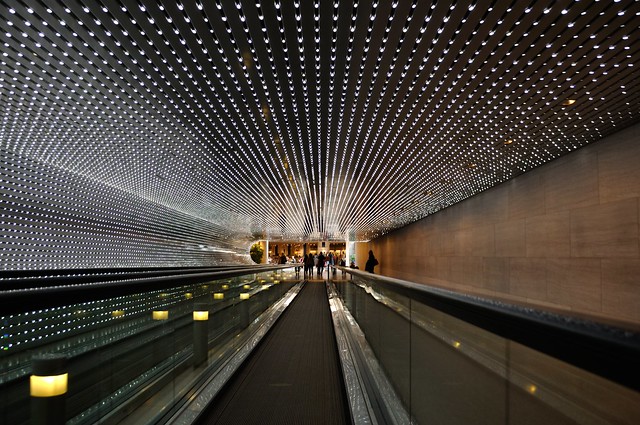 National Gallery of Art LED Tunnel. Heidi, via Flickr, under CC BY-SA 2.0
In Switzerland, increasing the energy efficiency of lighting has the following impacts:

Reduces final energy demand, though the saving in electricity will be partly offset by an increased need of heating in the heating season.

CFLs contain mercury and require dedicated end of life treatment which is hard to enforce.

Likely to have limited impact on the cost of the energy transition.

Lighting represents almost 20% of global electricity consumption. This consumption is equivalent to the amount of electricity generated by a nuclear power. IEA estimates show the total savings potential in residential and services lighting at more than 2.4 EJ per year by 2030.[1]

DEFINITION - What is Lighting Efficiency?

CFLs and LEDs are available in different forms, with the latter not being suitable for replacement of fluorescent tubes in most settings, though the latter are already quite efficient. Both offer much longer lifetimes than incandescent bulbs.

In some countries, the sale of some incandescent bulbs is no longer permitted (Switzerland only banned light bulbs of the energy efficiency class F and G).

Lighting management systems can also reduce electricity consumption in commercial and industrial buildings by switching off lights according to predefined patterns, or in response to occupancy sensors.

Passive building measures may also improve daylighting through, for example, window size and orientation, inclusion of light wells and light tubes for rooms without windows. This will reduce electricity demand.

CONSTRAINTS - What are the key barriers facing the increase of Lighting Efficiency?

Consumers are reluctant to higher purchase costs (without subsidy) despite lower lifetime costs.

‘Rebound effects’ may counteract the energy savings from more efficient appliances. The financial savings from lower running costs can lead to purchase of more appliances, or changes in lifestyle (e.g. wash more often).

Replacement of old incandescent bulbs before their failure is perceived by the customers to be an economic incongruity.

Not all light fittings can accommodate more efficient bulbs.

Some LEDs and CFLs cannot be dimmed, so wiring is incompatible.

LEDs and CFLs provide light of a different colour temperature than incandescent or halogen bulbs, which is sometimes felt less attractive and comfortable for the sight.

The expected future value ranges for the average lighting performance are:

In 2011 the average electricity consumption per square meter in terms of lighting was 3.2 kWh/m2 [2].